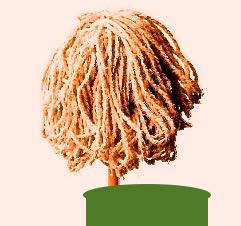 Admittedly MIA from Justme…a combination of wrapping up the piecing the quilt tops before family and guests begin arriving, spring cleaning and general busy-ness.

It was rather cathartic, giving my home a thorough cleaning, concluding with a rather thin motley orange mop tossed out with the garbage and poking out of the top of the green trash can. From a distance, I swore it had a comb-over, but that could have just been wishful thinking.

This was the usual spring cleaning, dust-bunnies included. I don’t have a lot of extra stuff; most everything I have, I use. It’s been part and parcel of being a gypsy and moving fairly regularly.

In one of my early moves, just post-divorce so it was a long time past, I rented a small storage unit for all the treasures I couldn’t part with.  A few months into my adventure, as I wrote the check for the monthly fee, I began wondering just what exactly was nestled in that storage unit.

So, I drove there shortly thereafter, on another spring day much  like today. I arrived at the storage facility, punched in my code, unlocked and rolled up the metal door and stood face to face with no more than ten boxes.  In the grand scope of things, it was a pretty meager stack and certainly, at face value, not worth the monthly fee I had been paying.

That was even more evident when I opened said boxes.  Good grief, talk about junk.

Needless to say, I tossed a lot into the garbage, loaded up the very few items worth keeping and cancelled the storage unit.  Since then, I’ve been vicious at recycling, donating and tossing a whole lot.  And haven’t missed much of anything.

This year, however, has been a bit different due to this new quilting adventure.  Having been both handed a large bin of scraps from our local Project: Linus and having my own smaller collection, I managed to piece together four — count ’em, four — scrappy quilt tops.  Now, I’m in a bit of a quandary: what to toss; what to keep.

The whole process gave me pause.  The scraps became one queen, two twin and one crib quilt tops. Out of habit, I probably tossed more scraps than I should have and I began to wonder what other things could have been put to good use, other than the trash or recycle can.

On the other hand, the scraps are gone and my guest/sewing closet is once again relatively neat, organized and ready for guests. And, of course, another quilt.  Or two.  Or three.  But first, family, friends and then a run at actually quilting the five tops I did make this winter.