About a month or so 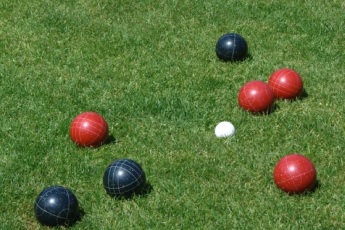 back, I was invited to join a couples Bocce Ball team.

It’s what I love, in addition to the lake, the quiet and the views, about this community.  Being half of a couple is not a detriment to much of anything.

Still, I hesitated.  I had never played the game and, even in my salad days, athletics were never a strong suit.

Then I learned the name of the team: Debocceries…and that they had landed in last place last season, and probably the seasons before that.  No one could actually remember and didn’t really care.

I agreed to attend a wine ‘n cheese strategy meeting prior to the season opening.  Introductions all around, a glass or two or three of wine, lively converstion and then the strategy from our captain.

I’ll be handing out calendars as soon as I get them.  I’m not making reminder calls.  You are on your own.  Just show up when we’re scheduled.

Yep, this could work.

The first match — three games — came a few weeks later. My next door neighbor was playing on the adjoining court and sauntered over to both greet and reprimand me before our games began.

You’re drinking water?  It’s illegal.  You need a drink.  Or two. And what are you doing on their team and not ours?

You didn’t ask me.

You should have known.  There aren’t that many Italians around.

With that, the games began. My partner went first while I watched.

Then I picked up one of the two rather hefty balls, walked up to the line, eyed the little white target ball that we were supposed to get as close to as possible and rolled the ball down the green.  Both of the darn balls just snuggled right up to the target Pallino, looked back at me and winked.

In one of the first times in Deboccery memory — remembering, of course, the consumption of wine, beer and other assorted libations — we won the match.

Our captain declared me a ringer. I wasn’t so sure; beginner’s luck and all.

Last night, we played our second match against a much younger team. It was 50 degrees — an unexpected cold snap — and we were all freezing.

Once I warmed up a bit, my cute little bocce balls just seemed to weave their way through all the others to get as close as possible to the Pallino.

They were probably freezing and just seeking warmth from huddling with one another. Nonetheless, they added to our score.

My youthful opponent, a young man with flowing blonde hair, kept looking at me and demanding, How do you do that? That’s impossible to do. Tell me how you do that.

Practice from years of throwing erasers at students.

He believed me. Never batted an eye.

We English teachers must have some reputation.

Although it makes for a good story, I’ve never thrown anything at a student, tempting though it may have been. I opted more for the long, silent mom-glare, which meant that within seconds, everyone in the class was staring at the offender, who became very attentive, very quickly.

Better than coating the room in a cloud of chalk dust.